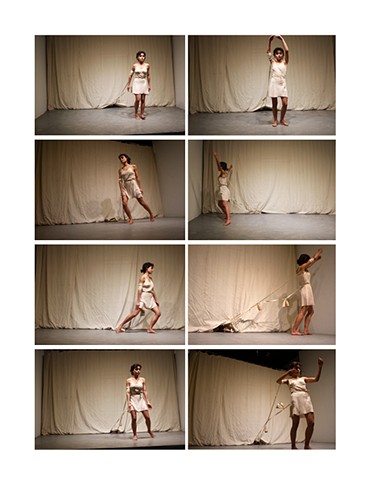 A dancer follows a choreography with the waist and one arm tied with long, loose strings that disappears behind stage curtains. A stagehand gradually hooks stones to the strings. Performing repeated movements, body and string track a change over time. The performance elicits the tension between presence and absence, the seen and the unseen, but otherwise perceived. The movements explore a model for change within repetition and evoke the burdens of memory and imagination, and, ultimately, the relationship between mind and action.

"No-hand on no-strings (A line made by a hand chasing the other)" was presented on February 28, 2020, at ARC Gallery, in Chicago, as part of Defibrillator Gallery's anniversary exhibition "What Remains: On the Sacred, the Lost, and the Forgotten Relics of Live Art." In Chicago, the weights were made with stones and iron bars from the construction on the Jane Byrne Interchange, wrapped in anti-rodent copper mesh. The role of the stagehand was taken by my twin sister.

On February 8, 2020 a version of the work was presented as part of a collective performance with Ayanna Woods and Juliana Wähner at Casa Rosada, in Salvador. The weights were paving stones from the contentious construction work on Oceânica Avenue, wrapped in a synthetic mesh used to cordon open pits on the site.

This performance was developed in residency at Ativa Atelier Livre, in Salvador, Brazil.