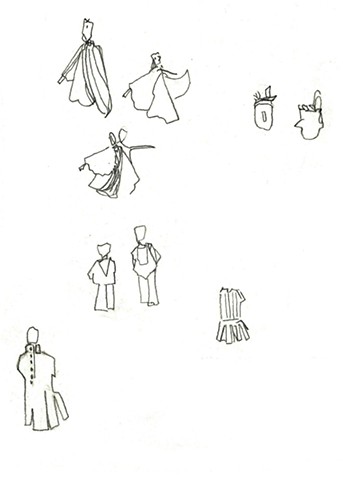 Antinous, a procession-play
Performance
< previous next >

PROCESSION-PLAY "Antinous" results from an assemblage between two homonymous texts, which draw from the story of the Roman emperor Hadrian (76-138 CE) and his lover Antinous. “Antinous (fragment) – Episodio quasi dramatico,” by Sergio Buarque de Hollanda, published in the modernist magazine Klaxon, n. 4 (São Paulo, 1922), translated, was the basis for the procession events. The source for the intimist lines of Emperor Hadrian was an early version of the poem “Antinous,” written by Fernando Pessoa, in English, in 1915 and published in 1918 (Lisbon). A Carnival parade, a religious procession, a protest parade, and a funeral procession: all are evoked by the “procession-play.”

PARADE To be performed in transit through a series of convenient places in the city, which must each work well as arena or stage, towards a building of choice.

IN THE CITY The place for Antinous is Chicago: city built by man, where everything that surrounds you is an affirmation of the human fantasy of domination over land and nature. The ideal site is the Jane Byrne Interchange: a monument to the 20th century city.

The Interchange is near where the “heart of Chicago” would have been in Burnham’s 1909 Plan of Chicago. The Civic Center was meant to be a colossal structure “at the center of a system of arteries of circulation and of the surrounding country.” The street crossing employed a Haussmannian vista, where large avenues met at the hill-sized, neoclassical embodiment of Burnham’s desire for the White City.

Today, the Interchange is its own monument to the city of automobiles and agile logistics; concrete highways as arteries defiantly rising in the air; immensely outsizing the human body.

The area is currently a massive construction site: frames for elevated highways resemble the ruins of ancient arches; enormous cranes rest by hills formed by debris and dug-up dirt. In the construction site, the walkable paths under the roads and wide medians between highways evoke destruction and construction, old and new desires, surrounded by the contours of the tech-tuned Fulton Market and the tallest buildings downtown.

Alternative locations are monumental buildings associated with political or economic power, out of which the Thompson Center is preferred. The failures surrounding the Thompson Center make it particularly compatible with the last moment of the parade. * * *

The full text (version from March 2020) can be read on Mouse Magazine.

Wearables, Objects and casting for Antinous are a collaboration with Raffa Reuther, Breanne Johnson, Mariel Martinez, and Cecília Resende Santos.

For more information on the ongoing research practice on the Jane Byrne Interchange and a dossier documenting the construction of concepts and wearables for Antinous, contact Marina Resende Santos at mares at marinaresendesantos.com.