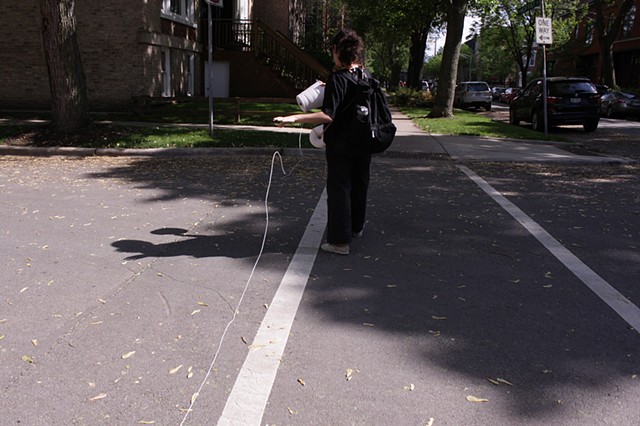 We connected our houses with string. Bucktown to Little Village, North to South on Western Ave. 3200 feet and 20 pounds of cotton twine, the same we used to hang paper flags in school, became lighter as we unrolled it on the streets of Chicago. One encounter with the police; many with curious passersby and occasional followers.

We walked across informal but not invisible boundaries that make this city - one of the most racially and spatially segregated cities in the United States, with North, West and South signifying ethnic and economic borders, separated by vast industrial stretches, marking territories known and foreign to Chicago’s own dwellers.

The string act started as a simple idea that related two houses (and two sisters), and ended by representing both a circumscribed observation about the science of land measurement, and the state of our relationship today. The redundancy of the act, and in spite of that the effort that it requires, the opacity of tracing an emotional relation on the ground of the city, tell something that we did not even wish to acknowledge about the state of our Home today.

On one end, the house as a vessel: the physical house of bricks, steel, glass. On the other end, the emotional family home that appears stretched in the twine.