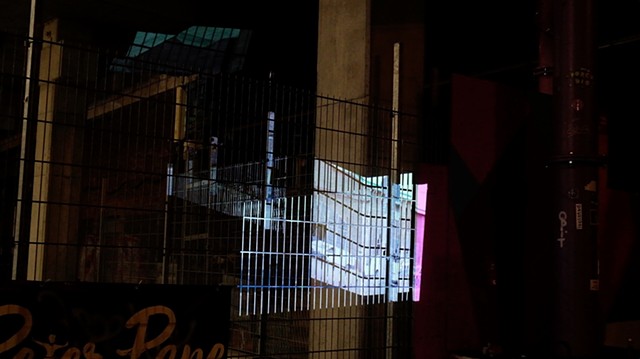 No drivers room (you are standing outside)
Video-installation
< previous next >

“One of the worst Amazons in all of Europe. Standing on the street during unloading. Very bad.”

“1. No drivers room (you are standing outside or at the reception desk with one chair and a crowd of employees passing by despite covid)”

So has the Amazon Logistics Centre in Borsigwerke, Berlin, been reviewed by truckers and other professionals on Google Reviews. This video observes one hour of daily traffic at the Amazon warehouse in Berlin’s Alt Tegel neighbourhood. At this location, cargo from larger trucks and containers is loaded to smaller, inconspicuous white vans, which then distribute the orders to destinations in the city. While trucks drop in less often during the day, the white vans come out in rows regularly after every ten or fifteen minutes from a dedicated gate. Occasionally, groups of navy blue vans with the Amazon smile logo float in and out of the site, carrying Amazon Prime orders.

The angle of the video reflects the distance needed in order to record for an extended period without being noticed or legally at risk while filming on site. It also alludes to “waiting outside,” uneasily, as vehicles are loaded and unloaded; an experience frequently reported by drivers who deliver at the site, and observed among van drivers in this very recording. The video reports on the rhythm and labour of logistics in a particular site of one of the world’s most powerful private logistical mobilizers, making usually unseen operations visible.

The first installation of the video was done over and into the fence of the construction site of the new EDGE, aka Amazon Tower in Berlin, the "smart" skyscraper where the logistics and tech giant will house its European AI and web services headquarters. The projector was connected to the battery in a car parked on the sidewalk. "No drivers room" transformed fence grids into sympathetic surfaces and poured over the construction materials that will build yet another physical foundation for Amazon.

In its second installation, during UNBOXING (Make-up, May 2021), the video closed in the final distribution circuit, shaping over Amazon cardboard boxes of the kind that is packaged and sent from Tegel and received by many at home.