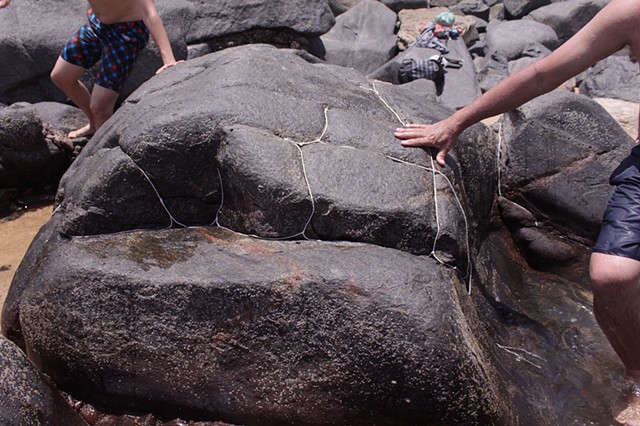 The stones on Buracão beach, in Salvador, are cut through with straight lines that mark a metric surface or suggest deep ingrains left by tight ties around a package. Using cotton twine and small nail-clipping scissors borrowed from a beach vendor, I traced the etchings on a large stone, making a net of string that - lifted away - would have rendered the topography of the stone in a two-dimensional plane. The most effective way to secure the string into the rifts was to sink it with running water - following the same path water had traced to cut those very rifts. This almost redundant gesture at once underscored and artificialised the natural marks of the seaside geology. Observed by the many beach-goers who enjoyed the far end of a city beach, the action eventually reflected the conflictive relationship of people to the beach as both a natural, elemental resort, and a managed and highly manufactured territory in the city.

As the tide rose and Buracão’s notoriously aggressive waves hit the stone and slowly flooded around it, the string fit deeper into the surface, and then was lifted off it by the lower ends, slowly releasing a net that planified the stone surface.

This work was developed while in residency at Ativa Atelier Livre, Salvador, Brazil.